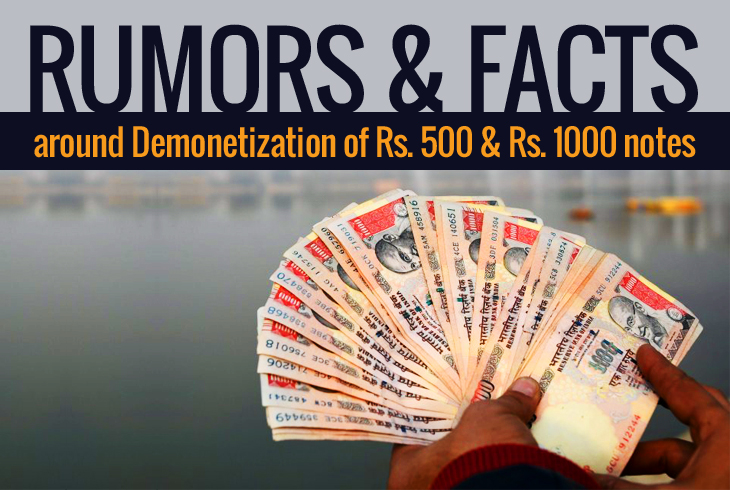 Whenever a news surfaces on Social Media; heaps of articles, updates and blogs are bombarded on our news feeds. One after the other, they flood us with infinite topics around that one subject. Not only that; people also start expressing their opinions and views on social media channels in the forms of comments, memes and other updates. But, in all this information overload, some rumours are bound to spread around, which creates chaos and panic among people.

So, when the demonetization news came out a loud hue and cry could be seen among the people. Though public at large appreciated and supported the move but at other hand everyone was trying to settle down with the new currency and exchange of notes. And amidst all these, some baseless rumours also started making their own place, which created another outcry among the people.

Let’s have a look at some of the rumours and what the truth is to make life a little easier for everyone.

Rumour: The new Rs. 2000 is equipped with a trackable Nano Chip.

Fact: Everyone has heard about this one, since the news of Rs. 2000 notes came out. But, this is not true and the note does not come with any trackable Nano Chip. Even the RBI has clarified this by issuing a formal statement.

Fact: It was like one ban was not enough that people started spreading rumours around the ban of these 2 notes as well. But, Ministry of Information and Broadcasting soon tweeted that the news is completely baseless.

Fact: Well, this rumour has also given space to the rumour that it is leaving color and the note might be a fake one. But, later it was cleared that a special ink is used for printing the notes due to which it is happening and it does not make it fake.

Rumour: The next step will be to seal bank lockers & freeze gold/diamond/jewellery.

Fact: This is another one, which became a nightmare for many people, but it is a false news. There has been no such proposal for sealing bank lockers and jewellery.

Rumour: Transporters are going on a strike because of this news.

Fact: There were forwarded Whatsapp messages, Facebook and Twitter updates around this news, but it is not at all true. No such strike is happening and the Ministry of Road transport and highways has also cleared the news.

So, if you were concerned about these rumours, then do not worry because these are not true and you can share this article to let others also know that these are false stories.