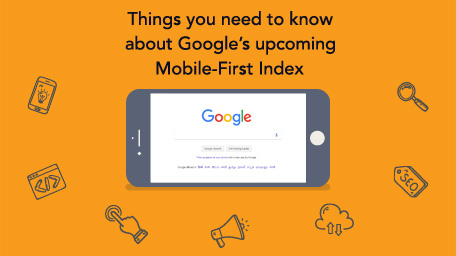 Google is the first thing that pops up in mind, whenever it is about searching something or browsing a website. It is the universe of information and is used worldwide for about any and everything. Not only that, for businesses worldwide to monitor the analytics; Google has the complete download of who is searching for what on the search engine. However, until now, the index of Google was only focusing on the crawling sites built for desktop computers. But, now it is shifting its focus to mobile users.

Yes, with the growing number of mobile users that have outnumbered the desktop users around the world, Google has announced that it will create a mobile first index specifically for these users. However, it is important to know what it means and what it has in store for you. So, let’s gain some understanding about it and the benefits it has to offer.

Starting with understanding Indexing and how it works, it is used to determine what needs to be shown when a user searches something. Google crawls websites to collect information about what they offer and what individual pages on your site offer specifically. Crawling also enables Google to know the ‘rules’ of your website, including what pages to be followed or what should not be followed, and so on. Google, then sorts this information in its database and this process is known as indexing. It also makes a copy of these pages in a usable format for its algorithm.

So, as of now Google only has Desktop index, so it looks for specific information when a mobile user searches something and it also checks the mobile signals for that website and then adjust the results accordingly.

This causes a problem as users on desktop are shown some rich content as compared to the mobile users. Some marketers may have recognized this glitch and they take their customers to apps or emailer pop ups.

With Mobile indexing, Google is hoping to resolve this issue and determine what content is relevant to mobile users and then indexing and ranking sites accordingly.

How it can affect sites

The brands that use a responsive site design, nothing will change them with the mobile index.

Now, in case of separate mobile website (m.example.com ) or dynamic serving website, , if there is any content that is not there on the mobile site, then it could be an issue. So, it’s time to ensure all the content on the desktop version also appears on mobile version ( if content on desktop is too much to be incorporated into the mobile version, you may use options such as accordions and tabs in case of mobile version to show content as per user’s demand – hidden content is not given lesser weight by Google on mobile version ). On the other hand, brands that do not have a mobile site, don’t have to panic, Googlewill   crawl/process the desktop version    for rankings in mobile searches.  However, it is to be noted that a mobile version of the website has a better chance to gain visibility in mobile searches. So, If your website is not responsive or doesn’t have a mobile version, It’s time to act now!

If you don’t have a mobile version, it is recommended to go responsive rather than adopting other two ways of making the website mobile friendly ( separate mobile website or dynamic serving ) because in case of a responsive website your mobile version will be the equivalent version of your desktop version and that is what Google exactly wants.

Go now, gear up for the upcoming mobile-first index. Already have a perfect responsive website? Sit back and relax!